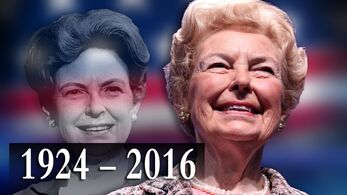 Phyllis Schlafly has been a national leader of the conservative movement since the publication of her best-selling 1964 book, A Choice Not An Echo. She has been a leader of the pro-family movement since 1972, when she started her national volunteer organization called Eagle Forum.
ACTIVISM: In a ten-year battle, Phyllis led the pro-family movement to victory over the principal legislative goal of the radical feminists, called the Equal Rights Amendment (ERA). An articulate and successful opponent of the radical feminist movement, she appears in debate on college campuses more frequently than any other conservative. She was named one of the 100 most important women of the 20th century by the Ladies’ Home Journal and in 1992 Phyllis was named "Mother of the Year" in Illinois.
Phyllis's lifetime hobby was politics, starting with working as campaign manager for a successful Republican candidate for Congress in St. Louis in 1946, Claude Bakewell. She served as an elected Delegate to eight Republican National Conventions: 1956, 1964, 1968, 1984, 1988, 1992, 1996, 2004, and 2012; and as an elected Alternate Delegate to four other Republican National Conventions: 1960, 1980, 2000, and 2008. She has attended and played an active role in every Republican National Convention since 1952.
Her 1964 book A Choice Not an Echo is a history of Republican National Conventions. She was three times elected President of the Illinois Federation of Republican Women, 1960-64, and was elected First Vice President, National Federation of Republican Women (1964-1967). She was a candidate for Congress from Illinois in 1952 and in 1970, in two different districts. She received numerous awards for volunteer service to the Republican Party. In 1990, she founded Republican National Coalition for Life with the specific mission of protecting the pro-life plank in the Republican Party Platform.
Phyllis served five three-year terms as National Chairman of National Defense for the National Society, Daughters of the American Revolution (1977- 80, 1983-95). Previously, she served as National Chairman of American History Month (1965-68) and as National Chairman of the Bicentennial Committee (1967-70). A DAR member of Ninian Edwards Chapter in Alton, Illinois since the 1950s, she served two terms as Chapter Regent and is now Honorary Chapter Regent. She served two terms as Illinois State Chairman of National Defense and one term as Illinois State Recording Secretary and Editor of the State Yearbook.

MEDIA: Phyllis's monthly newsletter called "The Phyllis Schlafly Report" (now named "Eagle Forum Report")  is now in its 53rd year. Her syndicated column appeared regularly in 100 newspapers, and on many conservative websites.
Radio: Phyllis's radio commentaries were heard daily on over 600 stations, while her radio talk show on education called “Eagle Forum Live” was heard weekly on 90 stations. Both can be heard on the internet.
Her radio career began in the 1970s when she was a regular semi-weekly CBS commentator on the Spectrum series (1973-1978), and for WBBM Chicago (1973-1975). For four years in the 1960s, she was the speaker on a 15-minute weekly statewide radio program sponsored by the Illinois Daughters of the American Revolution.
Television: Phyllis did weekly television commentaries on the CBS Morning News, 1974-1975, and on CNN, 1980-83. She has also written and produced several documentary videos on such issues as American inventors, education, and treaties. She has appeared on almost every network news and public affairs program.

Books: Phyllis is the author or editor of 20 books on subjects as varied as family and feminism (The Power of the Positive Woman, Feminist Fantasies, and The Flipside of Feminism); religion (No Higher Power: Obama’s War on Religious Freedom); nuclear strategy (The Gravediggers, Strike From Space, The Betrayers, and Kissinger on the Couch); education (Child Abuse in the Classroom); child care (Who Will Rock the Cradle?); the judiciary (The Supremacists: The Tyranny of Judges and How to Stop It); pornography (Pornography’s Victims); and biography (Mindszenty the Man). Her lifetime dedication to the problem of illiteracy led her to develop a phonics system to teach reading skills. First Reader (1994) is designed for the beginning child, and Turbo Reader (2001) is a revised version for the student of any age.

FAMILY: Phyllis was the 1992 Illinois Mother of the Year. She and her late husband of 44 years are the parents of six children (John, Bruce, Roger, Liza, Andrew, and Anne) and 14 grandchildren. She taught all her children to read before they entered school and all had outstanding academic success: three lawyers, one physician, one Ph.D. mathematician, and one businesswoman.
Husband: John Fred Schlafly, attorney, married in 1949, died 1993; they lived in Alton, Illinois, where he practiced law.
Children: John, attorney; Bruce, orthopedic surgeon; Roger, software developer (California); Liza Forshaw, attorney; Andy, attorney (New Jersey); Anne Cori, businesswoman (Kitchen Conservatory in Clayton, Missouri).
Residence: born in St. Louis August 15, 1924, and grew up there, graduating first in her high school class at the Academy of Sacred Heart. She was married October 20, 1949 at the St. Louis Cathedral; spent her married life in Alton, Illinois, 1949-1993; since then lives in Ladue, Missouri.

AWARDS: Phyllis received numerous awards for service in a variety of fields. Honorary Doctor of Humane Letters from Washington University. Honorary LL.D. from Niagara University. Honorary Doctor of Christian Letters from Franciscan University of Steubenville. Ten honor awards from Freedoms Foundation of Valley Forge. Brotherhood Award from the National Conference of Christians and Jews (1975). National patriot awards from both the Sons of the Revolution and the Sons of the American Revolution. In 1998, the Ladies’ Home Journal named her one of the 100 Most Important Women of the 20th Century. She was named one of the Ten Most Admired Women in the World in the Good Housekeeping poll for many years: 1977-1990. The World Almanac named her one of the 25 Most Influential Women in America during the years 1978-1985. When Richard Amberg, publisher of St. Louis Globe-Democrat, presented her with the Women of Achievement Award in 1963, he said: “Phyllis Schlafly stands for everything that has made America great and for those things which will keep it that way.”

President Ronald Reagan gave Phyllis a lifetime full time volunteer in public policy making, this tribute at a national meeting in 1984:
“Eagle Forum has set a high standard of volunteer participation in the political and legislative process. . . . You’ve been out front on so many of the most important issues of our time. . . . Your work is an example to all those who would struggle for an America that is prosperous and free. . . . Our nation needs the kind of dedicated individual volunteer service you and Eagle Forum have demonstrated over the last 20 years.”

When The Reagan Diaries were published in 2007, it was discovered that the President wrote on March 21, 1983: “Phyllis Schlafly came by. She’s darned effective. Her plan to counter the new E.R.A campaign is brilliant.”

The economist George Gilder wrote in his book Men & Marriage (Pelican, 1987): “When the histories of this era are seriously written, Phyllis Schlafly will take her place among the tiny number of leaders who made a decisive and permanent difference. She changed the political landscape of her country. In fact, by the measure of the odds she faced and overcame, Schlafly’s achievement excels all the others’. . . . She won in part because she is one of the country’s best speakers and debaters and its best pamphleteer since Tom Paine. She won because of her indefatigable energy and will power, mobilizing women in state after state.”

Joseph Lelyveld wrote in the New York Times Magazine (April 17, 1977): “Phyllis Schlafly has become one of the most relentless and accomplished platform debaters of any gender to be found on any side of any issue.”

Bob Novak was a truly great newspaperman. Here is a portion of his speech at Phyllis Schlafly’s 80th Birthday Gala on September 18, 2004:
“The first I ever heard of Phyllis Schlafly was in 1964 when she published A Choice Not an Echo. I read the book and I thought it was one of the best-written, most interesting, fascinating pieces of political advocacy that I had ever read in my life. And I wouldn’t say I disagreed with everything in it, but damn near everything. Now, I am in the process of writing my memoirs and I came across a copy of the book in the process and I sat down and read it all the way through. I couldn’t stop. And you know, forty years later, I agree with almost everything in it.” Tribute by Bob Novak

Statement made by U.S. Rep. Steve King at the Clare Boothe Luce Awards event, 2010. "Few people have done as much as Phyllis to advance the cause of constitutional conservatism. She is truly a national treasure. Clearly, the United States of America would be a vastly different place were it not for the efforts of Phyllis Schlafly. It would be a country in which conservatism might not have become the predominant ideology of the Republican party.  When Phyllis offers her opinion on an issue, one can be assured that it is an opinion that is rooted in an intellectual understanding of the founding principles of this nation instead of in the passing fads of the era. This is one of the reasons that Phyllis remains such an important figure to the conservative movement. Quite simply, she is the clearest political and constitutional thinker of our time, and one of conservatism’s most successful grassroots activists. Members of Congress hold Phyllis in such great respect that a word from her can immediately change votes on an issue."

The James C. Dobson Vision and Leadership Award, given by Family Research Council, 2009
“Her exemplary vision and leadership, for the past half century, have been the hallmark of her life and a chief cornerstone of the pro-family movement. We are proud to honor her as a champion of the enduring values that make America great.”